The stage was pitch black.

Gutt, donning a trenchcoat and aviators, strutted to the mic.

Cue the lights…STP’s in town.

If only for a night, Stone Temple Pilots transported Green Bay back to the 90s–the decade of flannels, MTV and grunge.

The San Diego-based rock icons stopped in Green Bay on October 22 as part of a 17-part nationwide tour.

For nearly two hours, they rocked the new EPIC Event Center, rolling through 19 of their top hits, including a two-song encore.

Though most songs came from their first two albums, Core and Purple, the setlist spanned five albums from 1992-1999.

Everything from the drop-dead grunge song “Dead and Bloated,” iconic radio hits “Plush” and “Interstate Love Song” and the haunting echoes of “Wicked Garden,” were included.

Despite being on the band’s third frontman, remarkably little has changed.

Gutt was all over the stage, even taking an opportunity to step into the crowd and lock hands with fans in the front row while performing the song “Down” (sneaking off to grab some hand sanitizer before the next song, of course–a reminder of the times).

He may not be Scott Weiland, I’m not sure anyone could ever be, but he certainly did the late vocalist justice and meshed well with STP’s original cast.

Likewise, the veteran DeLeo brothers and Kretz showed they could still kick it with the best of them.

The DeLeo’s quick-twitch fingers brought life to classics like “Trippin on a Hole in a Paper Heart” and “Vasoline,” while Kretz’s steady beat and creative fills kept the band together throughout.

In some ways, it’s hard to put into words how great it was to see STP, with its exciting and equally tragic history, light up a live show again.

The venue was electric.

Fans were hooked from the very beginning, hoisting the ubiquitous two-finger rock hand sign, belting song hooks and breaking out into chants of “S-T-P” on more than one occasion.

Don’t just take it from me; Take it from Stone Temple Pilots themselves.

They took to Instagram Saturday, saying “my oh my did we enjoy spending the evening with you…,” and pledged “we’ll be back” as the band wrapped up their encore performance Friday.

STP truly rocked the house, but I’d be remiss to not mention the concert’s openers.

Opening for STP was Tyler Bryant and The Shakedown, a Nashville-based blues rock band that’s been active since 2009.

They played a set featuring some of the group’s biggest hits, including “Pressure,” “On to the Next” and “Born Rockin’.”

Bryant is a special talent on the guitar, that much was evident from his performance, and his crew didn’t shy away from playing to the crowd.

Toward the end of their set, drummer Caleb Crosby sprung from behind his kit with a drum in hand, positioned it on its side at center stage, and hammered away at it in an improvised solo for the better part of a minute.

The Shakedown may have scurried off the stage soon after, but they didn’t leave before I collected a souvenir.

When their set was done, guitarist Graham Whitford flung his guitar pick into the crowd, hitting me square in the chest.

The pick was branded on both sides, one with the band name and the other with Whitford’s. 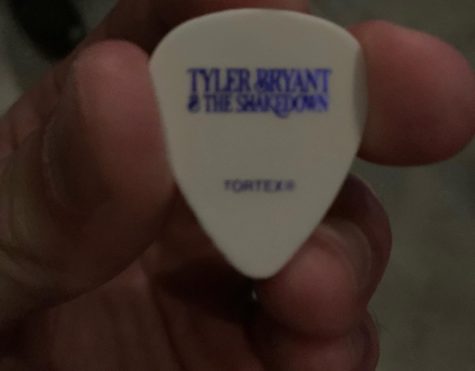 It goes without saying that I slid that souvenir into my pocket really fast.

All in all, the concert was a fun, well-awaited event.

It was truly great to be back to a live show (you don’t realize how much you miss it until you’re immersed in it again after a global pandemic, who knew?), and who better to spend it with than the legendary Stone Temple Pilots.

The Tritonian • Copyright 2022 • FLEX WordPress Theme by SNO • Log in